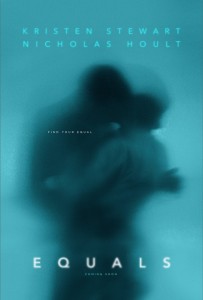 It’s not the worst Science-Fiction movie you could see, but “Equals”, clumsily directed by Drake Doremus, bored me to tears. I suppose it would only make sense to have Kristen Stewart in it, since everyone in this future society is supposed to be emotionless, even lifeless. The only actor who is allowed to dig into his role is Nicholas Hoult (“About a Boy”, “Warm Bodies“), who regains his feelings from a mysterious disease and falls in love with Stewart. If the plot sounds a lot like “The Giver” and so many other Sci-Fi films, then perhaps it is. And that’s one the main reasons why “Equals” ranks as a misfire in my book. As Hoult starts developing feelings, the film becomes more and more predictable. Other modern Sci-Fi films, from “Moon” to “Interstellar” take risks. “Equals” takes none. It’s safe, sorry and a bore.