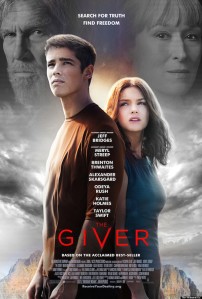 Enthralling and frustrating…grandiose and gimmicky. “The Giver” is all of these and more. It’s always interesting to watch filmmakers you admire take on the impossible. Lois Lowry’s Newberry Award-winning 1993 novel is a tough book to translate onscreen. And nobody makes it to the top. A story about a future without pain, war, suffering and love is a killer idea. So naturally, Philip Noyce took the dare. He also brought along a great cast led by Jeff Bridges, Meryl Streep and Katie Holmes. Like Newberry’s book, the idea is to show how dull a society can be without emotions. Only The Giver (Bridges) has the privilege to hold memories of the past in all their beauty and terror. But even a giver needs a replacement at some point. That would be young Jonas (Aussie actor Brenton Thwaites) who is ready to receive all the memories from the giver. The futuristic setting of the piece is beautifully and convincingly designed, but it’s the emotional power that should dominate and drive the story. And this is where the movie becomes both enthralling and frustrating. You can feel Noyce flirting with greatness so many times and yet I was left strangely silent at the end. That’s because this audacious, original piece of work is less than fully satisfying. On one hand, the movie attempts to tell us that love conquers all. At the same time, we see that war and pain are a constant over the centuries, which justifies the need for a society devoid of emotions. Thus the panorama of “The Giver” is both exhilarating and disappointing. I can’t ignore the film’s many faults, but I can’t dismiss it either because there is so much passion and invention in it. Judge for yourself.