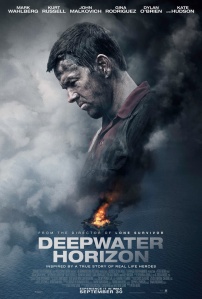 It’s the worst oil spill in American history. April 20, 2010, 35 miles off the Louisiana coast in the Gulf of Mexico, a deepwater drilling rig explodes, killing 11 people and injuring many others. Director Peter Berg depicts the events leading up to the explosion, and I gotta tell you folks, I couldn’t care less for anything happening onscreen. I have nothing but respect for the people who went through this terrible ordeal, but the movie failed to captivate me. Mark Wahlberg, who worked with Berg on the much superior “Lone Survivor”, plays a chief electronics technician who finds himself fighting for his life following the explosion. Wahlberg is always a pleasure to watch, and he’s probably the only reason why the movie isn’t a complete waste of time.The explosion scene and its aftermath are well staged, but the movie is relentless. In many key scenes it is evident that Wahlberg’s presence is the story’s most valuable asset. I just wish the film had left me feeling satisfied instead of tired and worn out. I can admire the story behind it, but I can’t say I enjoyed it that much.