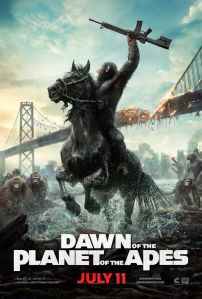 Summer season takes an unexpected turn with “Dawn of the Planet of the Apes”, a spectacular follow up to the 2011 hit starring Andy Serkis, Jason Clarke and directed by Matt Reeves. I couldn’t be more surprised to be honest. After 7 movies and Tim Burton’s crappy remake, the series has been milked hard, it’s a wonder there’s still room for surprises. Anyway, what I’m saying is that “Dawn”made a monkey out of me. I was certain it would suck. Instead, the movie rises and offers an incredible visual experience in glorious 3D. No more guys squeezed into monkey suits. Performance-capture makes everything seem fresh. To watch what actor Andy Serkis does as Caesar, the lead ape from “Rise of the Planet of the Apes”, is to witness a kind of miracle. In fact, Serkis gives by far one of the best performances in the movie, and he is right there on set, acting alongside Jason Clarke, Kerri Russell and the great Gary Oldman. Caesar’s tribe now lives in the woods, a decade after the events of the previous movie. Humans have been wiped out as a result of the deadly virus. Except they haven’t, at least not entirely. When a group of humans enters the woods, hoping to restart the power plant for a community of survivors living in the abandoned city, their leader (Clarke) manages to convince Caesar that they mean them no harm. Things eventually go wrong, as they should, but to reveal more would be unthinkable. And yet, none of this would matter if the apes, chimps and gorillas weren’t so incredibly convincing. These performance-capture roles are remarkable and they are the backbone of the story. Whine all you want about the cheesy acting of the humans, the shameless tearjerking in the script by Rick Jaffa and Amanda Silver, and the predictable storyline. Solid points for sure. Just wait. As soon as Caesar appears onscreen, you’ll be hooked. Credit director Matt Reeves for making the most of this opportunity and scoring an absolute bull’s-eye. Still, the real story of this film is written in Caesar’s eyes. The images of him as a leader are iconic, and Serkis makes the idea of yet another sequel seem promising, instead of dreadful. I’d follow this ape anywhere.