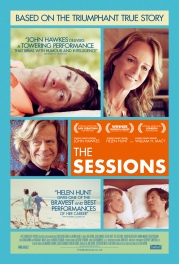 John Hawkes and Helen Hunt are worth the price of admission to “The Sessions” all by themselves, as far as I’m concerned. That the film is so smart and entertaining is icing on the cake. Many moviegoers are most comfortable with cookie-cutter films that give them what they expect. I didn’t know what to anticipate from “The Sessions“, but I couldn’t have foreseen such an ambitious, emotionally powerful story. John Hawkes is one of the finest actors out there at the moment, and he does a tremendous job here, transforming himself into the San Francisco poet and journalist Mark O’Brien, a polio victim who spends most of his time in an iron lung. Now at 38, he wants to experience sex for the first time, so he decides to see a sex surrogate, played by the amazing Helen Hunt. No worries, the movie never paints a ridiculous portrait of O’Brien. That’s because Aussie writer-director Ben Lewin (who also suffered from Polio as a child) knows his material and knows that O’Brien refused to be defined by his condition. The tone of the movie subtly changes as it reaches its climax, but  never missteps, and the results are both poignant and believable. Here is yet another movie that puts Hollywood’s bloated blockbusters to shame. I have a feeling it will stay with me for some time to come.