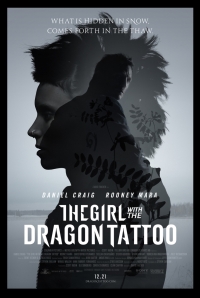 The american version of “The Girl With The Dragon Tattoo” is gripping and unusual, even if you’ve seen the Swedish film that inspired it, which in turn was based on a novel by Stieg Larson. If you did catch that striking Swedish import two years ago, you should be familiar with the story by now. Director David Fincher, who made his reputation with such great movies as “Fight Club”, “The Social Network” and the underrated “Zodiac” wisely followed the original and made only a handful of (mostly inventive) deviations. I admire both his fidelity and his restraint, and I’m glad to say that I loved everything about his film. From the casting of Rooney Mara as Lisbeth, the 23 year old goth chick with piercings and body tattoos, to the wonderful cinematography, “Dragon Tattoo” is one hell of a ride. If you haven’t seen the original film, or don’t tend to watch foreign language films with subtitles, then I wholeheartedly recommend the remake. I usually shy away from violent films, but this one presents its moments of violence in the context of provocative story with highly unusual characters.  Like the original, we first meet Michael (a terrific Daniel Craig), a disgraced reporter who is called upon by a member of the Vagner family to look into the disappearance of his niece Harriet some 40 years ago. Craig’s unlikely ally in researching the case is a strange, antisocial but talented computer hacker named Lisbeth Salander. The story not only deals with investigative journalism, but a series of violent attacks on women in which Lisbeth is a victim of. One of the most shocking scenes has her guardian beating and repeatedly raping her. These moments were tough to endure the first time in the Swedish version, and they’re just as difficult this time around, but they work for the benefit of the picture. Fincher of course has traveled this road before in “Seven” and “Zodiac”. He brings all his skills to bear in telling this unusual story; the cold atmosphere of snowy Sweden is mesmerizing from start to finish, and his setup of the film’s many characters is  almost flawless. Daniel Craig does a great job, and takes a different approach than Michael Nyqvist in the role of Michael Blomkvist. Christopher Plummer, Stellan Skarsgård, and Steven Berkoff are fine in key supporting roles. As for Mara, shes’s perfect as the intriguing Lisbeth Salander, a character who becomes more understandable in the second and third part of the trilogy.

With an inventive and properly moody score by Trent Reznor, “The Girl With The Dragon Tattoo” dares to take its time. In a way I wish I hadn’t seen the Swedish movie, because it would have been fun to experience this film without knowing all of its dramatic beats and surprises. But I can still appreciate the skill with which it’s been made—and applaud that rare Hollywood remake of a foreign film that can stand alongside the original. Thumbs up David Fincher.