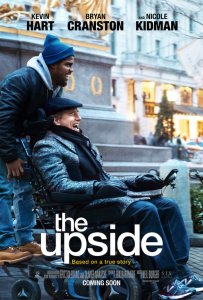 On paper, this Hollywood version of the french hit “Intouchables” has no reason to exist. But I tried to keep an open mind as I was watching it last night. As a result, I found myself enjoying it. It’s nowhere near as funny or moving as the original, but with that aside, it’s an enjoyable film. Much like the french movie, “The Upside” follows the unlikely bond between Phil (Cranston), a widowed millionaire paralyzed from the neck down after a paragliding accident, and Dell (Hart), an ex-con who is employed by Phil as his personal carer. Bryan Cranston and Kevin Hart have good chemistry together, and they make the most of it, especially in key moments. The only downside? They just happen to be in a movie that nobody asked for. The original was perfect as it is, and it had no reason to be remade. That might annoy a lot of people, but if you manage to get past this, you’ll have a good time with “The Upside”. It’s not perfect by any means, but it offers some genuine laughs.