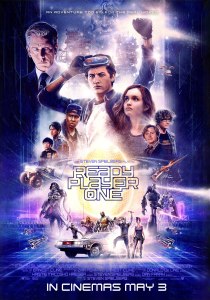 Can a movie be set in 2045 and still feels straight out of the 80’s? The answer lies in Steven Spielberg’s CGI extravaganza “Ready Player One”, an ode to pop culture and…dare I say…the Atari 2600, which holds a special place in my heart. But good CGI doesn’t mean a damn thing if the movie lacked heart and passion, and that’s where Spielberg scores extra points. What’s happening onscreen matters so much to the characters in the story, so it matters to us too. It isn’t coincidental that Spielberg would adapt a story that references the 80’s at every turn. This is also the period in which he captured the imagination of so many moviegoers with his timeless films. Part of “Ready Player One” is a tribute to this era, but it never feels recycled or second-hand. It is old-school for sure, and will most likely appeal to gamers and nostalgic film buffs, which is why I had a mighty good time watching it. In terms of plot, “Ready Player One” is basically a boy’s journey to win a video game contest. Mark Rylance plays the creator of a virtual reality world called the “OASIS” who, following his death, challenges all its users to find a hidden Easter egg within his world, which will give the winner all his fortune. Of course, there are clues to decipher, keys to find, obstacles to overcome, and at 140 minutes, it can feel a bit too much. Still, Spielberg keeps the fun going, and despite a heavy reliance on CGI, he is also a skillful storyteller (Michael Bay, take notes), and that’s what makes “Ready Player One” so satisfying. In a perfect world, it would inspire young viewers to seek out some retro video games and films from the 80’s. At the very least, it will show audiences what a great director can do when he’s truly passionate about his project. “Ready Player One” is a Spielberg film through and through. And it’s a gem.