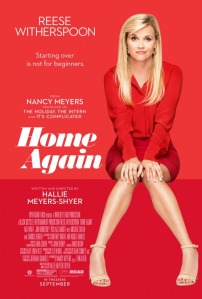 I love Reese Witherspoon and I have no problem whatsoever with a chick flick written and directed by Hallie Meyers-Shyer (daughter of Nancy Meyers), but even they can’t save “Home Again” from being strictly generic. Many times, you can feel Meyers channeling her mother, but the overall result is just too predictable and shallow. Witherspoon plays a 40-year old single mom of two who’s just left New York for Los Angeles. No worries, she’s about to move back into her childhood palace, where she used to live with her late filmmaker dad and movie-star mother (Candice Bergen). Enter three young aspiring filmmakers, who end up crashing at her guest house while working on their movie script. Yes, she’s about to sleep with one of them. No, there’s nothing that you haven’t seen before. On the plus side, and like most of Nancy Meyers’ films, “Home Again” is populated with likable characters and lavish sets, but in terms of story, it’s strictly routine. It’s still oddly watchable, but with all the actors involved, I can’t help wishing for something better.