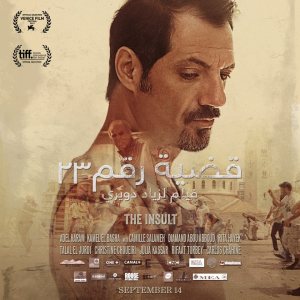 Lebanese filmmaker Ziad Doueiri needs no introduction, having directed a series of successful films over the years. While “West Beirut” will forever remain my favorite movie, his latest effort, “The Insult”, further confirms his skill as a talented storyteller. In short: it’s one of the most intense Lebanese movies I’ve ever seen. What makes “The Insult” so good is the way Doueiri  takes a seemingly ordinary situation and builds a web of suspense around it. Adel Karam (in one of the best performances of his career) plays Toni, a Lebanese christian who can’t seem to let go of the past. One day, he gets into a heated argument with a Palestinian worker (played by an excellent Kamel El Basha), which leads to a domino-like sequence of unpredictable events. Doueiri masterfully explores the dark side of each character, especially as it relates to patriotism, politics, and the consequences of taking revenge. I’d say this is Doueiri’s specialty, and the sense of discomfort he creates throughout this exceptional film will hold you in its grip at every turn. And when it ends, it leaves us with much food for thought, something that’s been missing from most recent Lebanese films. Having been criticized so many times for not supporting local movies, it’s refreshing to finally encounter something worth recommending. Ziad Doueiri’s “The Insult”  is a terrific achievement.