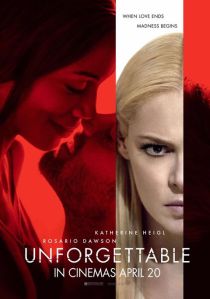 Katherine Heigl plays the crazy ex wife. I’m not spoiling anything here since we know right from the start that her ex husband David ( Geoff Stults) is getting married to Julia (Rosario Dawson) and she isn’t very happy about it. Her plan? To make Julia’s life a living hell (obviously). Nothing special or revolutionary here, but it’s the way Heigl handles her material that makes “Unforgettable” a half decent thriller, at least until it reaches its cheesy climax. Heigl is so persuasive that you wish the movie had more surprises in store. No luck. As she slips into complete madness, the movie slips with her, substituting tension for routine horror. Until then, “Unforgettable” remains watchable, and in an era of reboots and rehashes (how many times have you seen a movie about a crazy ex?), this ranks as a major accomplishment. Just don’t expect too much from it.