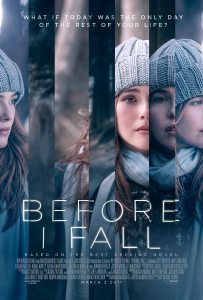 In this teen flick based on Lauren Oliver’s bestselling book, Zoey Deutch plays a young woman who wakes up every morning to discover that she is reliving Groundhog Day all over again. I’m kidding, of course, but no one can deny the similarities between the two films, which is why it’s so easy to dismiss “Before I Fall” as just another rehash of a much better movie. To be fair though, there’s an intriguing idea at the heart of “Before I fall”, so let’s start right from the beginning: Deutch is a high-school senior who dies in a car accident. Then she wakes up the next morning to relive the same day all over again. And again. And again. A curse? Or is she supposed to change something along the way? Director Ry Russo-Young tries to keep us guessing (and succeeds at first), but the story quickly wears out its welcome and never reaches a satisfying conclusion. It goes without saying that Deutch is a gifted actress and she is the main reason why the movie doesn’t completely implode. I only wish the movie itself had more twists up its sleeve. Harold Ramis took chances with “Groundhog Day”. So did Doug Liman with “Edge of Tomorrow”. “Before I fall” takes none. It’s safe, sorry and as forgettable as a fast food meal.