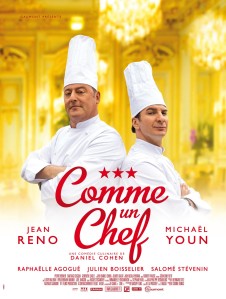 I’ve been in the grip of a bad cold for almost 4 days; I somehow managed to work a little bit on my blog, but I hadn’t seen a movie since Tuesday (which in my book is about a century). By Friday afternoon I was frustrated, so I did what I’ve always done when I’m feeling sick: I went to the movies. I wasn’t in the mood for something loud (those who expected a “Battleship” review, I apologize). I’d missed screenings of “Comme un Chef” and it looked funny, so that’s what I chose to see. It’s a commercial, crowd-pleasing movie with engaging performances by Jean Renot and Michael Youn. But because it’s a french film, I suspect most audiences won’t bother to see it and that’s a shame. It puts most of Hollywood’s recent comedies to shame, even though it’s not a masterpiece (far from it actually). Youn plays Jacky, a self-trained cook with haute-cuisine ambitions. He gets fired from a series of cooking jobs for taking exception to his customers’ taste. Meanwhile, we meet Alexandre Lagarde (Renot), the famous chef of the three-star Cargo Lagarde, who is facing a crisis of a different sort: The interfering son of his retired business partner wants him to cut costs and update the menu; he even threatens to fire him if the restaurant loses a star. The story may not be edgy, or hugely profound, but I found the movie funny and quite likable. The two stars make a memorable duo, and turn this otherwise predictable comedy into something refreshing and worth watching. At the end of the day, I’m glad I checked it out, and the experience accomplished what moviegoing almost always does for me on these occasions: it made me feel slightly better.