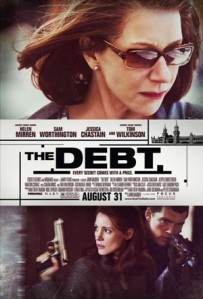 A movie with an intriguing story ought to have a finale that doesn’t remind you of some cheesy action film. Sadly, such is the case with “The Debt”, a Nazi-hunting thriller starring Helen Mirren, Sam Worthington, Tom Wilkinson and Jessica Chastain. The cast is ace, and the story pulls you in as soon as it opens:  three Mossad agents converge in East Berlin in the mid 1960’s to capture a Nazi doctor who performed unspeakable experiments on Jewish victims during World War Two. Their mission: abduct him and bring him back to Israel so he can stand trial. Meanwhile, it’s 1997, and Mossad agent Rachel Singer (Mirren) is being honored for her heroism for killing the Nazi doctor, nicknamed “surgeon of Birkenau”. But did she? The movie goes back and forth in time to show us what really transpired in East Berlin. To my mind, “The Debt” is both absorbing and absurd. I loved the first part, which focused more on the events that took place in 1965. But by the time we got back to the present (or 1997), I couldn’t care less about the characters or their problems. Unlike Spielberg’s “Munich”, which tapped deep into the Mossad’s way of life, “The Debt” is an entertaining, yet forgettable riff on “Munich”. None of this is the actor’s fault, as they give it their best, especially Helen Mirren, who handles a difficult role with skill, as usual. If only the movie had a more powerful conclusion-perhaps I should say meaningful- this could have been something huge. Instead, it felt pointless.