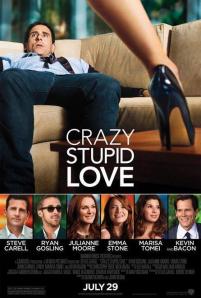 Well how do you like that? A movie that is both sweet and funny. “Crazy, Stupid, Love”, from directors Glenn Ficarra and John Requa (“I Love You, Phillip Morris”) comes as a pleasant surprise, and in a year of crap-taculars, that is a great relief (Screw you Michael Bay once again). Much of the film’s appeal is generated by the wonderful cast. Steve Carell is really proving himself as a first class actor. Julianne Moore is as terrific as always. Emma Stone has been really good these past few years, and she scores yet another bulls-eye here. But the real surprise to me was Ryan Gosling. I consider him as one of the best actors of his generation (if you haven’t seen him in “Lars And The Real Girl” and “Half Nelson”, I suggest you do), and in “Crazy, Stupid, Love”, he scores a comic knockout as Jacob Palmer, a pickup artist who makes it his duty to transform boring Cal (Carell) into a “cool” dad and get him laid. Carell makes his transformation both funny and genuine. His pairing with Gosling turns the film into an outrageous relationship game. Jacob falls for lawyer-to-be Hannah (Emma Stone). Cal, who wants his wife back after their divorce, has no idea that teen babysitter Jessica has got the hots for him  (say what?), or that his 13 year old son Robbie is in love with Jessica (say what?). To make things even worse,Cal pulls a one-nighter with hot teacher Kate (a hilarious Marisa Tomei), who also happens to be Robbie’s 8th grade teacher (say what?). Lost? Of course. But what makes “Crazy, Stupid, Love” such a fresh comedy, is the fact that the characters in it aren’t afraid to turn their painful moments into laughs. That’s the movie’s strength, and even though it uses all its assets during the first hour and a half, and still has another thirty minutes to go, I’m still willing to forgive its weaknesses, because I had such a good time watching it. At the end, and after one hell of a crazy ride, I felt a weird satisfaction. I’ll say no more, except that Carell and Gosling are this year’s hottest pairing. See for yourself.