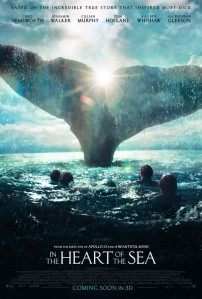 “In The Heart of the Sea” is a good old fashioned sea story from a master director, Ron Howard. In adapting Nathaniel Philbrick’s Book about the story that inspired “Moby Dick”, Howard recounts the journey of Essex, a Nantucket whaleship that sank after being attacked by a giant sperm whale. Ancient territory? Perhaps. But in the hands of Howard, “In The Heart Of The Sea” emerges as a one of a kind experience that will even seduce the most rabid sea movie haters. It’s also impossible to imagine this movie with anyone but Chris Hemsworth in the leading role. He plays Owen Chase, a man who has sailed for years and believes that he doesn’t belong under the command of Captain George Pollard (Benjamin Walker) for this journey. Hemsworth makes the character both credible and relatable as few others could, making it impossible not to root for him to survive. That’s not to say that this is merely a star vehicle. The movie is filled with good supporting actors like Brendan Gleeson, Cillian Murphy and Ben Whishaw. “In The Heart of the Sea” is also remarkably executed. I can’t remember the last time I watched a sea movie as exciting as this one. Movie magic may have been at work in more than one scene, but it’s all been rendered invisible, thanks to Howard and his talented team of filmmakers. The result is a faithful adaptation of a fascinating story. It’s hard for me not to recommend it.