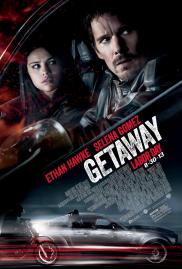 Do not confuse this terrible mess with Steve McQueen’s classic movie “The Getaway”. This loud, ugly film made my ears hurt. Which leads me to this: why in hell do Hollywood studios always choose September to bury their misfires? They must think we won’t notice, distracted by the summer leftovers (I’m talking to you, “Riddick“). Well we notice, especially when a new film falls on its fat one. Exhibit A: “Getaway” a non stop action movie in every sense of the word that flushes a good actor (Ethan Hawke) down the sinkhole. Hawke, terrific in “Before Midnight“, plays Brent Magra, a former NASCAR driver racing a Mustang through the streets of Bulgaria. And he does it for the whole damn movie. Why? Because some asshole kidnapped his wife. Then the horrible Selena Gomez shows up and tries to steal the car. Don’t ask. The script, written by two people, doesn’t have an original idea in its dizzy head. It looks like an entertaining popcorn movie, but it’s running on empty, ripping off every car movie ever made. When the dialogue gets too much, director Courtney Salomon (the horrible “Captivity” and “An American Haunting) cuts to the action, which is all sound and fury signifying nothing. What’s your tolerance level for this stupid nonsense? You know best. Being stoned or otherwise drunk might help.