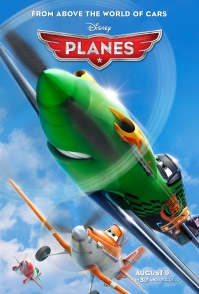 I admire Disney’s animated features a lot, that it hurts to actually give one of their movies a low rating. Then again I’ve never gotten a headache watching any of their previous films. Because there is no leftover story to tell from “Cars” anymore, “Planes” takes place in the same world, except that it features…well planes. The hero is a crop-duster named Dusty (voiced by Dane Cook) who leads a modest life. And yet Dusty dreams of entering an around the world race competition, strictly dominated by big aircraft. Can you guess what happens next? Even a predictable animated movie could be entertaining if it had a solid story and interesting characters to hang onto. Sadly there isn’t here. Worse, it never stops moving; you just don’t know where or why. Am I being too harsh on a movie that’s out to entertain kids? If I am, it’s only because Disney and Pixar have set the bar so high. I still admire what they’ve achieved in the past, and look forward to their next feature.