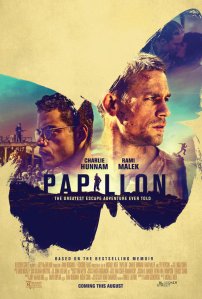 Here’s a pleasant surprise: a remake that doesn’t suck. It would be easy to dismiss it at first as an updated version that has no reason to exist, but once you warm up to it, it’s just as brutal and poignant as the 1973 classic starring Steve McQueen and Dustin Hoffman. The “heroes” this time around are Charlie Hunnam (“King Arthur”) and Rami Malek (“Mr. Robot) who show real acting chops as two prisoners who spent years together planning their escape. If you’ve seen the original movie, then you probably know the outcome of the story. Either way, you’ll find yourself rooting for these characters, every step of the way, as they try to survive the horrific conditions of this merciless prison. If I’m being completely honest, I still prefer Steve McQueen over Charlie Hunnam in the title role. But there’s no denying that Hunnam gives it his very best, and you can’t possibly dismiss that. Same goes for Malek. I guess if you had to remake a film, at least hire the right actors for the job, and the people behind this film got it right. It’s a long, and quite often violent ride. But it’s a ride worth taking.