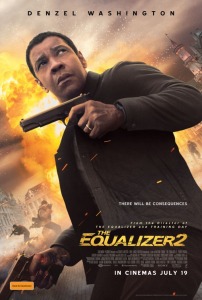 Denzel Washington kicking ass is probably everything you need to see this summer. This sequel to the 2014 hit follows the same formula, which means you won’t go in expecting a fast-paced action flick like “Taken” or “Mission Impossible”. But director Antoine Fuqua, who is often hailed as a lyrical filmmaker, does things his way, taking his precious time developing his characters and story. Washington yet again plays retired special-ops agent Robert McCall, who uses his regular job as a cover while he roams around the city fighting criminal scum. “Not all heroes wear cape” they say and McCall embodies that, taking justice into his own hands. Then things get personal, perhaps a bit too personal, and it’s up to our hero to step in and deliver justice. The movie runs long, and much like the first film, I could have done without many of the subplots. No matter, Fuqua delivers the goods when it matters the most, and it’s always a pleasure watching Washington kicking ass. I can’t think of anyone else capable of carrying the film through. Is it predictable? Probably. Is it still worth watching? You bet. Heck, I’d watch Washington in almost anything.