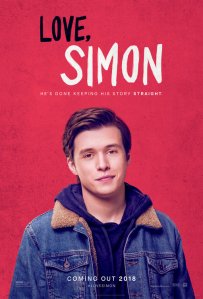 It’s not your typical boy meets girl coming-of-age stories. This is the story of Simon (wonderfully played by Nick Robinson), a teenager who is coming to terms with his sexuality, but still has no idea how to come out to his family or even his friends. Dad (Josh Duhamel) throws in gay jokes, while mom (Jennifer Garner) seems more understanding. When’s the right time to step in? “I’m just like you, except I have one huge-ass secret,” Simon says as soon as the movie opens. From that moment on, “Love, Simon” is a rollercoaster of emotions, but it’s also very funny. It helps that Simon is played by Nick Robinson, who brings stinging humor and surprising tenderness to his role, which gives us rooting interest from the word go. The movie also scores points for going beyond the typical coming-of-age stories aimed at teens, which makes it appealing to adults as well. Director Greg Berlanti’s compassion for his characters is reflected in each and every performance, leaving you with a feeling that you’ve just witnessed something genuine and heartwarming. Do not miss it.