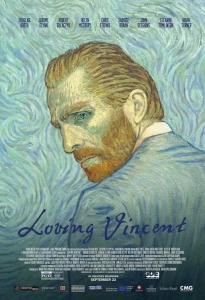 You can think of “Loving Vincent” as a gift for art lovers and movie buffs alike. It’s a mesmerizing look at Vincent Van Gogh’s final days, as elegantly interpreted by a team of 100 professional painters who hand painted every single frame of this truly unique film. That’s right, you’re not just watching a story here, you’re getting lost in its surreal world, making it the world’s first ever fully painted movie. How can you miss that? That’s not to say that the film doesn’t hit a few rough patches along the way, as we follow a man who is seeking the truth behind Van Gogh’s final days. People say that he shot himself, but there might be more to it. Part of the fun is trying to recognize the actors who portray all the characters in the story, but at its heart, “Loving Vincent” is a passionate tribute to one of the most influential artists of all time. As someone who didn’t know much about his personal life, I was intrigued at every turn. Indeed, “Loving Vincent” grabs you from the word go and never lets go. There’s magic in it.