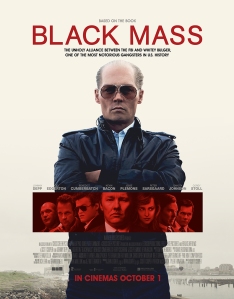 Maybe you’ve heard the internet buzz about “Black Mass” being Johnny Depp’s comeback movie. Maybe you’ll think so too if you’ve seen “Mortdecai” and/or last year’s horrible “Transcendence“. Despite the gangster theme (Depp has been there before in “Donnie Brasco” and “Public Enemies), “Black Mass” is one terrific movie. The opening scene sets the mood: Boston, circa 1975. And we’re off, watching Depp play real life Irish mobster James “Whitey” Bulger, who collaborated with the FBI to eliminate the Italian mob. All the actors bring their A game to this triumphant bruiser of a film; Joel Edgerton (terrific in “The Gift” and “Warrior“) and Benedict Cumberbatch give explosive, emotionally complex performances , but it must be said that this is Johnny Depp’s show, and he gives it his absolute best. Another asset of “Black Mass” is director Scott Cooper, best known for his light touch in “Crazy Heart” and “Get Low“. Most American directors would shamelessly copy Martin Scorsese in his “Goodfellas” mode, but Cooper adds something different to his film. It’s a fresh, welcome approach, and he gives Johnny Depp’s the opportunity to show his real acting skills. Ignore the irrelevant fan-boy questions: Will Depp finally win an Oscar? Is “Black Mass” an instant classic? The film, flawed by a few underwritten characters and some unnecessary scenes, pins you to your seat. It has a sting in its tail that is all too rare in gangster pictures these days. And Depp, Channeling James Cagney in 1949’s “White Heat” and Paul Muni in 1932’s “Scarface”, transforms himself completely to create a landmark portrait of evil. It’s easily his best performance in years.