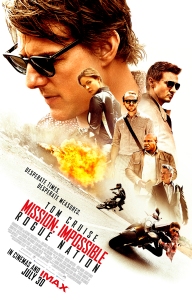 I’m a sucker for the Mission Impossible movies.  And I do believe that, unlike many series, this one has actually improved with each new installment ever since MI3 hit theaters back in 2006. Director J.J Abrams reinvigorated the concept back then and Brad Bird followed it up with the incredibly entertaining “Ghost Protocol” a few years later. The fifth installment, entitled “Rogue Nation” is by far one of the best ones yet; a breathtaking, globe-trotting action yarn that pulls out all the stops and then some. Director  Christopher McQuarrie doesn’t waste time introducing the characters, so the movie opens with a pulse pounding scene with Tom Cruise, 53, hanging off a plane. Some entrance. The plot this time around follows Cruise and his loyal IMF team (Jeremy Renner, Simon Pegg and Ving Rhames), now officially banned by CIA chief Alec Baldwin. But that won’t stop our man from chasing down an international organization called “The Syndicate”, lead by the mysterious Solomon Lane . Cruise is as watchable as ever, and proves to be nearly as indestructible as The Terminator in some of the best action sequences I’ve seen in quite a while. Do these scene make perfect sense? No. But they’re just entertaining enough to keep us hooked, especially since the film doesn’t pretend to be anything more than pure escapism. If you grew up watching Cruise and the Mission Impossible movies or if you simply crave action and don’t demand very much in the way of subtext, I think you’ll have a great time with “Rogue Nation”. It’s definitely one of the best films of  the summer season.