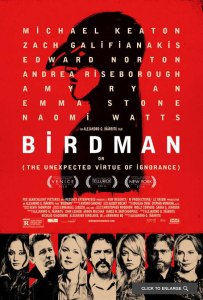 How to describe Michael Keaton’s raw, elemental tour de force as Riggan Thomson in “Birdman”? Think of a stick of dynamite with the fuse lit and ready to blow. That’s how brilliant he is. Keaton gets everything right about this actor who’s not ready to call it quits. Once upon a time, he was the star of a superhero franchise called “Birdman”. Since then, his career went downhill. Sounds pretty familiar right? Of course it does. After two rounds as the caped crusader in Tim Burton’s “Batman”, Keaton has fallen on hard times himself. As Riggan, his idea of a comeback is to make his Broadway debut by writing, directing and starring in a play called “What We Talk About When We Talk About Love”. Director Alejandro G. Iñárritu (“21 Grams”, “Babel”) gives this bruiser of a movie exactly the kind of no-bull honesty it needs. The scenes in which Riggan finds himself talking to the voice of Birdman in his dressing room are funny as hell. But they’re also gut-wrenchingly powerful. The entire movie is. Iñárritu and his co-screenwriters, Nicolás Giacobone, Alexander Dinelaris Jr. and Armando Bo transcend what could have been a formula story in lesser hands. Not here, baby. This is pure cinema, and I loved every minute of it.

Can Riggan climb back to the top? Well, Keaton sure can. With movies as bad as “Desperate Measures”, “First Daughter” and the atrocious “Post-Grad”, it’s no wonder Keaton disappeared from the scene for a while. He inched back with an OK supporting role in last year’s “Robocop”, but the star spot in “Birdman” makes him the year’s comeback kid. He doesn’t make a single false move in this movie. He is also revelatory in the intimate scenes with the excellent Emma Stone as Riggan’s daughter and the amazing Edward Norton as the “star” of his play. Stone is flat-out fabulous, playing a woman who knows as well as Riggan that he’s “not that important anymore”. You watch “Birdman” in a state of pure exhilaration. Great actors in a great movie will do that to you.