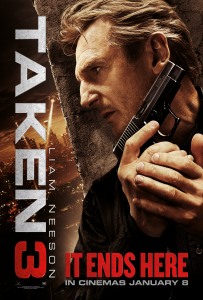 Ripping off “The Fugitive” and pretty much every single action thriller ever made, Liam Neeson has sadly saved the worst for last. “Taken 3” (or “Tak3n”) is 1 percent inspiration and 99 percent desperation. At 109 minutes, it’s almost 20 minutes longer than its crappy predecessor. Which means you’ll have to suffer even more before the credits start rolling. Good luck with that. So who’s to blame for the fuck up? Us, basically. Part 2 and 3 only exist because, after the huge success of the first movie (and it was a damn good movie), the studio got greedy. And you actually paid to see the sequel didn’t you? Hell, we all did. In a 2012 interview, Neeson himself confessed that he would never do a third movie. And yet here we are. But seriously man, didn’t the letdown of “Taken 2” teach you anything? Guess not. The new script, by Luc Besson and Robert Mark Kamen, is running on empty. Mills (Neeson) is finally home in LA. this time, trying to get things going again with Lenore, now unhappily married to a wealthy douchebag (Dougray Scott). But then Lenore is murdered and Mills is… wait for it…wrongfully accused of being her killer! Now he has to find the real killer while being the target of a manhunt, lead by Forest Whitaker who seems confused to what he’s doing here (I don’t blame him, the movie sucks). Watching the movie strain for cheap action scenes makes you feel Whitaker’s frustration. For a movie critic, screaming “damn you, Liam Nesson” just won’t cut it. There’s a responsibility to dig deeper into the reasons the final chapter in the “Taken” trilogy goes wrong – beyond indicting the paycheck-driven greed that pushes Hollywood to repeat and repeat every movie that makes tons of money at the box office. Or maybe that’s reason enough. Damn you, Liam Neeson.