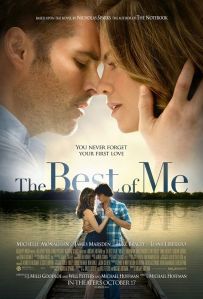 Based on the best-selling weepie by Nicholas Sparks, “The Best Of Me” is a hazard to all those allergic to cheesy chick flicks, or Sparks’ flicks in general. James Marsden stars as Dawson Cole, a man who is suddenly brought back into his ex-partner Amanda’s (Michelle Monaghan) company, when the pair meet to read the will of an old friend who had recently passed away. Then through flashbacks, we learn how they met and became childhood sweethearts 20 years earlier. They haven’t seen each other since, and while Amanda has moved on (aka married with a kid), Dawson has spent the last two decades hoping to win back the heart of his first love. Ugh. It’s love with tragic complications, and director Michael Hoffman drags the story out for almost two hours. The movie has its moments, mainly involving TV’s Gerald McRaney  who offers the only sly comic relief in this cheese-fest, but the handful of screenwriters who are credited with “The Best Of Me” are all too ready to fall back on tired movie clichés. Director Michael Hoffman can’t bring anything new to this recycled material, and what’s worse, the film becomes downright ridiculous towards the end. All that’s left is for us to admire the two good actors in the lead, which is better than nothing, but not enough to validate this watchable/forgettable love story.