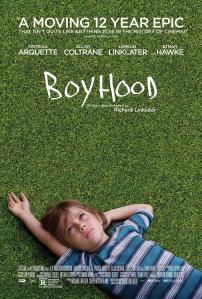 Artistic ambition can be a bitch for filmmakers. Stanley Kubrick was initially slammed in 1968 for aiming so high with “2001: A Space Odyssey”, now considered a classic. Lucky for him, and us, writer/director Richard Linklater (the genius behind the “Before Sunrise” trilogy) follows his own rigorous path. Whatever a modern story about boyhood is, Linklater’s ambitious film takes it to the next level. For starters, we watch a young boy grow up, year by year, from the ages of 6 to 18 (along with the rest of his family members). In a typical Hollywood film, you’d expect stuff out of the ordinary to happen. But Linklater isn’t interested in that. He simply wants to explore the inevitable drama in everyday life: the challenges of single parenting, the weirdness of being the new kid in school, the trauma of living with an alcoholic, the father/son relationship, the loss of innocence, graduation, and so much more. That’s a lot to digest in a movie that clocks in at almost 3 hours, but it is only after the film is over that you realize how good and honest it really is. Like Linklater’s many films, “Boyhood” delivers truths that don’t go down easy. And his actors, from Ellar Coltrane to Patricia Arquette and Ethan Hawke, score plenty of points for pulling off this experiment as well as they have. Everyone shines brilliantly, wearing their roles like second skin for a period of 12 years (shooting began in the summer of 2002 and ended in the fall of 2013). “Boyhood”, one of the year’s best and most unique experiences, crushes the big-budget crap infesting the multiplex. It’s a groundbreaker, a personal vision that dares to reach for the stars. No one with a genuine interest in the potential of film would think of missing it. No one.