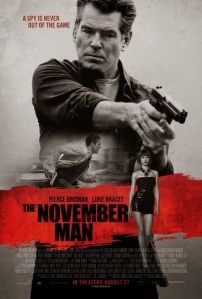 Wanna see a spy thriller that feels like leftovers from Pierce Brosnan’s days as James Bond? If so,”The November Man” is the movie for you. Brosnan plays an ex-CIA agent named Devereaux, who is pulled back into service by his old mates for one “final” mission and winds up in the middle of some conspiracy involving a Russian politician and…bla bla bla. Brosnan may still look good, but he doesn’t explode onscreen like he once did. The compensations, like former Bond girl Olga Kurylenko playing a woman with secrets of her own, can’t make up for the way the movie starts to smell like a lazy, repetitive do-over. For a spy thriller, “The November Man” is pretty dull stuff.