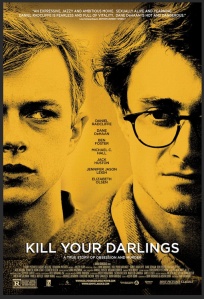 “Fuck you! You’re a phony”.That trash talk is aimed at Lucien Carr (Dane DeHaan) by Daniel Radcliffe, in fierce, flamboyant form as the young poet Allen Ginsberg, a Columbia freshman in 1944. Ginsberg falls under the spell of the charismatic Carr and along with Jack Kerouac (Jack Huston) and William S. Burroughs (Ben Foster), kicks off a literary revolution.There’s a murder too, involving Lucien’s stalker/lover, played by Dexter’s actor Michael C. Hall. Austin Bunn’s script attempts to jam it all in while director John Krokidas struggles with the awkward sex scenes. No deal. DeHaan and Foster do their best. And Radcliffe, free of Harry Potter, does better. He’s a live wire. It’s serious business and serious fun watching him try. “Kill Your Darlings” is all over the place trying to find a tone, but it knows where its heart is. I say give it a shot.