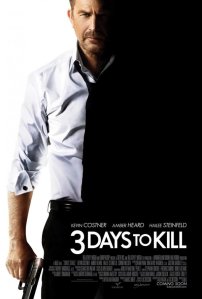 Luc Besson movies tend to be, well not so great. If you’re still enthused about his 1994 film “Leon”, my apologies. I’m not. In his latest film, directed by McG, Kevin Costner plays an international spy who tries to build a closer relationship with his family when he is diagnosed with a terminal disease. The doctors give him three months to live, so he quits his job and heads back to his home in Paris to reconnect with his estranged wife, Christine (Connie Nielsen), and daughter, Zoey (Hailee Steinfeld). Then out of nowhere, Amber Heard shows up and offers him a deal: one final mission and she’ll give him access to an experimental drug that will extend his life. Surprisingly, the movie has many funny moments and my guess is that Besson wanted to make a comedy. To be fair I did giggle at the scene in which Costner asks for advice from a man he wanted to kill (Ok you have to be there to get what I mean). The rest is a no go. Besson’s talent for farce is, to put it kindly, non-existent. And Costner, who hasn’t been in a box office hit (in a leading role) in a very long time, deserves better. Even Paris doesn’t come off in this mediocre film. “3 Days to Kill” had plenty of potential. Sadly, the result is a film that never rises.