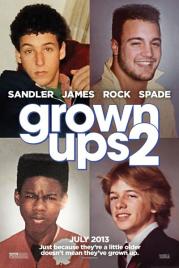 Look, I’m not an Adam Sandler hater. He was pretty good in “Reign Over Me”, “Funny People” and the underrated “Punch Drunk Love”. And I still have fun memories of “The Wedding Singer” with Drew Barrymore, made way before he turned into a doofus. That said, “Grown Ups 2” is arguably the unfunniest comedy in Adam Sandler’s career. And given the existence of “Jack and Jill” and the first “Grown Ups”, that’s something. This sequel moves from one stupid joke to another as we meet Sandler and his pals, Chris Rock, Kevin James and David Spade three years after the events of the first movie. This time around they’re planning a big party just like the old days, with an 80’s theme. Funny? Yes, for about five minutes. Apparently that’s enough to please a crowd. There’s a formula for this type of lousy product: Take a few comedians, get them to behave like morons and grab a grateful director (Dennis Dugan) who will not complain about having to pass off one pathetically thin joke as a full feature. The attitude being: Why complain if the suckers are buying? Well suck on it Hollywood. No comedy this year can beat this terrible, sorry excuse of a sequel. The movie opens with a deer repeatedly peeing all over Sandler’s family. See “Grown Ups 2” and you’ll know exactly how that feels.