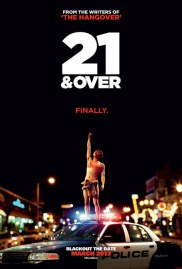 Remember “Superbad” in 2007 and “The Hangover” in 2009? If so, you’ll feel like you’ve already seen “21 & Over”, except that it isn’t funny or original at all. The movie features two morons who surprise their friend with a visit for his 21st birthday. The guy has an important medical school interview early the next morning but he decides to party and get drunk anyway. “Look Jeff Chang this is your 21st birthday…in the United States of America, Budweiser and bald eagles you go out and drink.” You get my point. Basically we’re getting more of the same here, but less of the impact. Not only does it recycle the same storylines, but forgets to include the most important ingredient: laughs. “21 & Over” is a pointless comedy, to say the least.