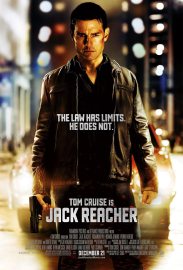 Call it cheesy, call it bullshit, call it whatever you want, but gotta admit: “Jack Reacher” is one heck of a vehicle for its leading star Tom Cruise, and he makes the most out of it. I couldn’t care less about it when I first saw the trailer and some folks I spoke to told me that Cruise has no business playing Reacher, the six-five, 250-pound ex-military cop in Lee Child’s novels. Surprise surprise. What I got instead is a movie that moves like a bullet and that maintains such a breakneck pace all the way through the closing credits. This is beneficial, because the story doesn’t always make sense. But when a film is this energetic and entertaining, it would be a shame to spoil the fun by demanding too much of it. The plot comes from “One Shot”, Child’s ninth Reacher novel. It opens with a sniper firing into a crowd, killing five people with six shots. Why? Don’t ask too many questions now. All you need to know is that Reacher is called in by number one suspect James Barr and this is where the fun begins. If I’ve been skimpy with plot details, it’s for your sake. This red-hot thriller keeps popping surprises that shouldn’t be spoiled. There are many colorful characters. Perhaps one too many. But it’s always a pleasure to see Robert Duvall and even German filmmaker Werner Herzog who plays a shadowy villain known only as the Zec. My chief complaint is that I can’t buy a key element in the makeup of the central character, which I can’t reveal.The result however is a movie that’s diverting and genuinely exciting to watch. Even with its flaws it provides solid entertainment and a great showcase for its star. Whether you buy it or not, hang on for the ride. It’s a twister.