“Generic” doesn’t even begin to describe “Dangerous Lies”, Netflix’s lazy thriller that was clearly made by people who have never seen a thriller before. This film oozes 90’s B-movies, and that’s not necessarily a good thing in this case. Camilla Mendes (a Netflix regular) plays a caretaker for an old man. When he unexpectedly dies one day, she finds herself drawn into a web of lies and intrigue. If this sounds exciting, then sorry to say it’s not.  Director Michael Scott has no flair for suspense, making the overall result feel curiously dull and recycled. Even when the revelations come at the end, it’s hard to care about any of it. I’ve seen my share of solid thrillers and “Dangerous Lies” isn’t one of them. Netflix can and should do better with this genre. 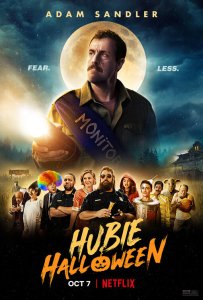 After his unforgettable performance in last year’s “Uncut Gems”, Adam Sandler goes back to his old, silly self in Netflix’s Halloween comedy “Hubie Halloween”. Sandler plays the good-hearted Hubie Dubois, a man devoted to his hometown of Salem. Hubie also happens to love Halloween so much, and this s obviously a setup for a night of silly/spooky gags. Unfortunately, and like most of Sandler’s comedy vehicles, the result is a forgettable film that rarely rises above the routine. Most of the gags fall flat (no surprises there), and the supporting cast (which includes Kevin James, Ray Liotta, Steve Buscemi, Maya Rudolph and, of course, Rob Schneider) is wasted. “Hubie Halloween” is dead on arrival. 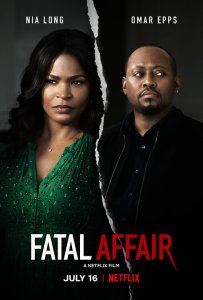 You’ve seen this movie a zillion times before: married woman (Nia Long, wasted) is reunited with her college boyfriend (Omar Epps). They kiss. She regrets it. He doesn’t. Surprise: he’s also an obsessed stalker who would stop at nothing to get what he wants. I’d call this Netflix film a cross between “Fatal Attraction” and a lot of movies of the same genre, but you probably knew that already. The result is a thriller that buries itself in endless clichés and never truly delivers something worth remembering (everything you need to know is in the trailer). 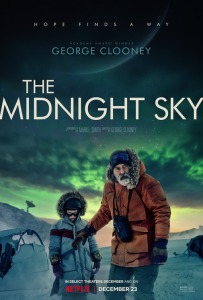 I rarely say this about any movie, but I truly struggled to finish “The Midnight Sky”, Netflix’s latest Science-Fiction film directed by and starring Georges Clooney. He plays a lone scientist whose sole purpose is to warn a crew of astronauts about a global catastrophe. Or something like that. The film is all over the place from the word go, with Clooney failing to deliver on an emotional level. How can anyone give a crap about all these characters if we’re not given a single reason to do so? But that’s just one of the things that bothered me here. Visually, the movie earns some extra points. But everything else is a dud. Space movies have never been this dull. Skip “The Midnight Sky” and stream the limited series “Away” instead.

Believe everything being said about this movie, and consider this a public service announcement: “Cuties” is difficult to watch and even more difficult to defend. I don’t usually mind “cautionary tales”, but there is nothing cautionary about this film. The  backlash started when a clip from the movie was shared on social media, showing a group of 11 year-old girls twerking and dancing in an inappropriate way during a contest. The movie itself, about a young girl who decides to rebel and join a group of dancers, is preposterous from start to finish. When asked about the original poster, Netflix claimed that “this was not an accurate representation of the film so the image and description has been updated”. But now that I’ve seen the film, I can tell you that the inappropriate scene and poster is an accurate representation of the movie.  Again, this isn’t a cautionary tale, and people are not overreacting. Personally, I try to keep an open mind with every new film that comes along, but I’m willing to make an exception here because “Cuties” is simply unwatchable.

To say that “Artemis Fowl” is Disney’s worst movie in years would truly be the understatement of the year. Having been delayed several times before it ultimately ended up on Disney +, the movie was doomed to fail right from the start. But I wanted to give it a chance, especially with Kenneth Branagh directing. As it turns out, the film is a complete disaster. There’s a lot of information to digest, which leads me to believe that even kids will find it hard to digest. To make it short, Artemis Fowl (Ferdia Shaw) is a kid genius who has to save his criminal dad (Colin Farrell, wasted) from a fairy turned bad. It’s a lazy premise for sure, which wouldn’t be much of a problem if the story was entertaining. But it isn’t. The script is completely lacking in heart and emotions that it’s hard to give a crap about any of its characters (including Fowl himself). Worst of all, it leaves the door open for a sequel (that will probably never happen). I don’t know what the people behind this misfire would hoping to achieve, but I don’t think anyone will enjoy what it has to offer. It’s easily one of the year’s worst movies.

Netflix’s “Coffee & Kareem” is only 88 minutes long (including the credits). So why on earth does it feel like an endurance test? It has none of the qualities of a decent comedy, and it’s a long way from Ed Helms’ “The Hangover”. He plays a police officer who teams up with the loudest kid you’ll ever meet (seriously, what the fuck was that) to take down Detroit’s most dangerous drug kingpin (don’t ask). Among the movie’s main problems is the fact that Helms’ character is more pathetic than amusing, and I’ve never seen a kid as annoying as Kareem. The result is…well…a recipe for disaster. This dreary, uninspired comedy (if you can call it that) gives Netflix’s movies a bad name. On the bright side, I hope I never have to see these characters ever again. “Coffee & Kareem” is the worst comedy I’ve seen so far this year. You have been warned.

This painfully unfunny comedy, courtesy of Miguel Arteta, is easily the one of worst films of the decade so far. Tiffany Haddish and Rose Byrne are wasted as Bffs who run a small, local cosmetics company. Enter Claire Luna (Salma Hayek, so bad), a giant in the industry who offers to cover their huge debts, as long as they agree to sell a big share of their business. Surprise: Luna is an evil mastermind with an agenda of her own. You can see everything coming a mile away, which isn’t necessarily a bad thing if the movie is actually entertaining. But “Like a Boss” has nothing going for it, from the jokes that constantly fall flat to the horrible performances. I honestly can’t remember the last time I witnessed a comedy as bad as this one. All the actresses (and especially Hayek) deserve a better vehicle than this turd. You’ve been warned: avoid this film like the plague (or Covid).

Where do I even begin?  This lazy, painfully unfunny comedy starring David Spade and Lauren Lapkus will have you cringing for 90 minutes (if you can make it to the finish line). Spade plays a “loser” who meets the woman of his dreams. Or at least he thought he did. When he invites her to his company’s weekend getaway, the wrong woman shows up (seriously, he was texting someone else all along by mistake), which leads to a series of catastrophic events (pun intended). Funny? For about 5 seconds. Part of the problem is Lapkus herself. Her character is annoying and downright obnoxious. And she gets no help from Spade, who seems to be embarrassed of being in this mess (who can blame him?).There’s not a genuine laugh here, unless you consider loud screaming and toilet jokes to be comedy. Not since the preposterous “Jack & Jill” have I witnessed something this God-awful. “The Wrong Missy” is streaming on Netflix. Now you know what not to stream.

Think of every bad movie you’ve seen (including the preposterous “50 Shades” trilogy), dig deeper and there you’ll find “365 Days”, a film so atrocious and so stupid, it shouldn’t be allowed to exist in this day and age. A truly awful Michele Morrone plays Massimo, a member of the Sicilian mafia family who has his own ways of making women fall in love with him: by kidnapping them. I swear I’m not making this shit up. His victim? Laura, a sales director on vacation with her boyfriend. Massimo is convinced that she’s the woman of his dreams, so he kidnaps her and gives her 365 days to fall in love with him. Seriously, I’m not making this shit up. Of course, Stockholm Syndrome is on the menu, which leads to a series of dull erotic sequences. Looking for a story? You won’t find any here. “365 Days” fails on every conceivable level. One may also argue that it’s offensive by blatantly romanticizing kidnapping. One thing’s for sure: you won’t find a movie as badly scripted, directed, and acted as this. It’s a horrible horrible thing to witness.

Categories: The Twenty-First Century, The worst movies of the year