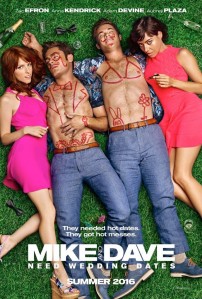 It’s not really a movie. Zac Efron, 29, and Adam Devine, 33, still acting like hormonally charged teenagers at their sister’s wedding in Hawaii. And yet they’ve been warned by their parents not to show up unless they find decent dates for the occasion. That would be Aubrey Plaza and Anna Kendrick, who aren’t as innocent as you would think. To say that the plan goes out of control is a mild understatement. I know “Mike and Dave” is not meant to be taken seriously. It’s a 2016 revision of “Wedding Crashers” , only much more crude and nowhere near as funny (there’s even a similar scene that falls flat). For me, the saddest part was watching these actors reference classic movies in the context of terrible dialogue. “You didn’t even get to say hello to my little friend” says a horrible Adam Devine at some point. You get my drift. The cast got to spend some time shooting in Hawaii. Good for them. Hell for us. “Mike and Dave” could be the perfect date movie, but only with someone you hate.