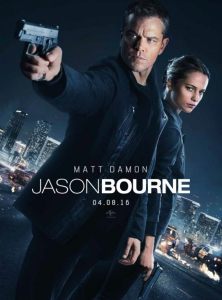 I’ve waited 9 years for Jason Bourne to finally resurface following the hugely entertaining “Bourne Ultimatum”, and despite its ageing material, the new Bourne film delivers the goods from start to finish. It’s also one hell of a comeback for Paul Greengrass (who previously directed “Supremacy” and “Ultimatum”), who keeps the suspense alive as Bourne trots the globe yet again. In Athens, Bourne is contacted by his former colleague Nicky Parsons (Julia Stiles) and learns that new CIA director Robert Dewey (Tommy Lee Jones, at his very best) is creating his own shadow government, very similar to the one from the previous films. That’s not all: Dewey also wants Bourne…wait for it…dead. Sounds familiar? It is. Know what? It doesn’t matter. Matt Damon and Paul Greengrass keep the movie thunderously exciting as we move from Berlin to London then finally Vegas for the final showdown. There’s also a nail biting car chase scene that surpasses everything you’ve ever seen onscreen before (take that, “Fast and Furious”). We’ve waited a long time for Jason Bourne to return. Now he’s here. You better hang on for the ride.