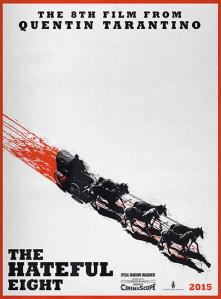 Only Quentin Tarantino can make a Western film that feels and looks like a stage play and get away with it. I’m talking about “The Hateful Eight”, Tarantino’s 8th feature film and second consecutive Western. If you’re down with that, you’ll have to endure a surprisingly slow first act as we meet the story’s weird but intriguing characters, lead by the great Kurt Russell as a bounty hunter travelling alongside his prisoner (a tremendous Jennifer Jason-Leigh) to a town called Red Rock where she will be hanged. But with a blizzard brewing, they find themselves forced to stop at a place called Minnie’s haberdashery until the storm is over. And this is where the fun begins. At 52, Tarantino still loves dialogue more than ever. So it’s easy to pick at his film’s flaws: it drags at 187 minutes, it is uneven at times and trips on its own ambition. Haters might even say that the movie lacks action for a Western flick. Sorry guys but Tarantino does it his way. He divides his movie into several chapters as usual and gives us a lot to cheer for: unforgettable sequences, a witty dialogue, a spectacular climax and an incredible cast that includes Samuel L. Jackson, Tim Roth, Michael Madsen, Bruce Dern and Channing Tatum. Will the violence shock audiences at times? You know it. But it wouldn’t be Tarantino otherwise. His “Hateful Eight” may lack the greatness of “Pulp Fiction”, “Inglourious Basterds”and “Reservoir Dogs”, but his love and passion for movies still shines through every scene.  I can’t wait to see where he goes next.