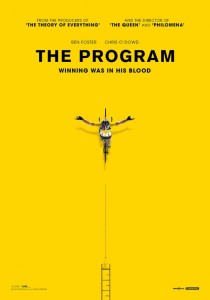 The truth was finally revealed in the 2013 documentary “The Armstrong Lie”, in which Lance Armstrong himself opened up about his doping allegations. The documentary was credible and above all, shocking. And by the end, we learned everything there is to know about the fallen idol. That places even greater pressure on the people behind “The Program” to engage us and—even more important—illuminate key elements of Armstrong’s story. Sorry to say, they don’t. The film is still fun to watch, especially early on: we meet a young Lance Armstrong who is determined to win the Tour De France one day, no matter what. We also witness his battle with cancer, his recovery and his return to the cycling world. But as soon as the film leaves this early period and focuses more on his doping days, it begins to resemble an old-fashioned Hollywood biopic. It’s smoothly done, under Stephen Frears’ direction, but we know most of the story already, and while Ben Foster does a very good job in the leading role, I still didn’t learn anything new by the time it was over. But if you’re curious about Armstrong’s story, or if you haven’t seen that superior Alex Gibney’s documentary, I would still recommend “The Program”.