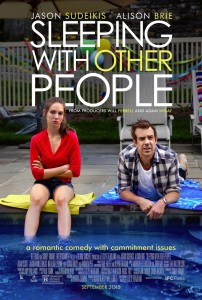 It’s not the romantic comedy of the year, but “Sleeping With Other People” has enough laughs and charm to keep you interested. The movie opens in 2002, where Jake (Jason Sudeikis) has sex for the first time with Lainey (Alison Brie). They reunite years later at a rehab for sex addicts and decide to become friends…without benefits! Writer director Leslye Headland (“Bachelorette”) had the promising idea to have these characters mock the idea that they’re in a romcom. And it does work for a while. But soon enough, they become slaves to the stereotypes they mean to make fun of. No worries. Sudeikis and Brie deliver on their promise and they make “Sleeping with other People” worth checking out on a date night.