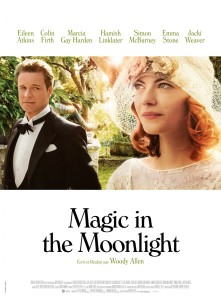 The best thing about being a Woody Allen fan is the certainty that if you don’t fully appreciate his latest film, he’s already got another one in the oven. Following the unprecedented audience reaction to “Midnight in Paris” and “Blue Jasmine“, Allen has conceived a new character-driven story set in 1928 France. It isn’t Allen’s best work, or his most original, but I did enjoy watching it. Colin Firth plays a stage magician who is asked to expose a young woman (Emma Stone), whose “fake” seances and phony psychic messages have been fooling a family of wealthy Americans in the South of France. Firth quickly agrees, until he meets the charming Stone and finds himself falling under her spell. All the usual Woody Allen ingredients are here and there are postcard views of France that make you want to book seats on the next plane (we’re already planning a trip). But the characters and their stories aren’t as interesting as you might think, and the movie soon wears out its welcome. Still, the actors do their best, and it’s a joy to see Colin Firth and Emma Stone in those beautiful 1920’s clothes. Rather than dwell on the film’s many faults, I prefer to think about the small, memorable details, and look forward to Woody’s next film.