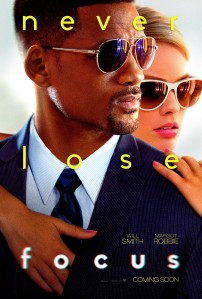 Everyone is different. I don’t like con artists, “magic tricks” or most of Will Smith movies (except maybe “The Pursuit of Happyness”). His exhausting new film suffers from a severe case of misdirection. That word describes the very nature of “Focus”, which purports to tell a clever story when all it’s doing is whirling in an endless spiral.  So what is it about? That’s hard to say; the two credited screenwriters might have other views on the subject. I don’t even know if Glenn Ficara and John Requa worked together on this patchwork script. As the movie opens, we meet con artist Nicky Spurgeon (Smith), whose ultimate trick is to divert your focus then rob you . Then he meets the beautiful Jess Barrett (Margot Robbie from “Wolf of Wall Street”), who becomes his  protégé. These characters are sketchily drawn, so the success of this film depends almost entirely on the storytelling, which is exceptionally cluttered. What annoys me most is that the film doesn’t trust its own premise, so it keeps coming up with endless twists and turns that mean absolutely nothing. As it turns out, that’s just a prelude to the final, ultimate twist, which is stupendously bogus. A good con artist doesn’t just perform “tricks”; he casts a spell. This disappointing movie never pulls off that particular feat.