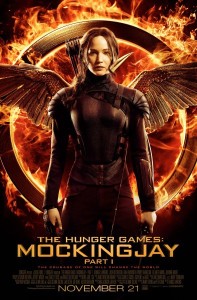 Splitting a final book into two parts can be a burden, especially for part one. By that standard, “The Hunger Games: Mockingjay- Part 1” , the third film based on Suzanne Collins’ bestselling trilogy should be a placeholder, stuck between the first two films and the grand finale. That’s not entirely true here. “Mockingjay- Part 1”, which builds on the box-office and critical success of last year’s “Catching Fire”, is darker, deeper and a solid build up to what promises to be one hell of a final showdown. But wait. Does that mean you have to chill until the series hits the action part? Yeah. Go with it. Or just watch the sublime Jennifer Lawrence take the role of Katniss Everdeen to new levels of ferocity and feeling. “Catching Fire” ended with her being rescued from the games by Plutarch (the late Philip Seymour Hoffman). This chapter opens with her being upset about the other competitors left behind, particularly Peeta. But there’s barely time for sentiments, as rebel leader Alma Coin (Julianne Moore, channeling Meryl Streep in “The Giver”) thinks that Katniss and the symbol of the Mockingjay are the only hope of keeping the spirit of rebellion alive. Still with me? Good, because anyone unfamiliar with the books, or the first two movies, will be left in the dark as this is a direct continuation of the story.

Once again, the success of “Hunger Games” revolves around Jennifer Lawrence, who has a commanding screen presence and brings something special to every character she plays (hence her multiple Oscar nominations). Katniss Everdeen remains a rebel who refuses to be intimidated by the threats of her President (Donald Sutherland) or the many obstacles that have been thrown in her way. But what delighted me the most was the humor and charm of this episode. The situation couldn’t be more dangerous and yet there were times when the movie settled into a lighter mode, easing us into the serious aspects of the story. My only complaint about the film is, that like many other in the series, it’s slow at times. I suppose this is inevitable, given the size and density of Suzanne Collin’s novels. Still in all, this is a welcome addition to the Hunger Games saga, and another chapter in one of the most ambitious and successful film series of the 21st Century. So forgive the rough patches and the abrupt ending. Katniss is a character worth a handful of sequels. You’ll follow her anywhere.

“Mockingjay- Part 2” will be released a year from now. My seat is already reserved for the grand finale.