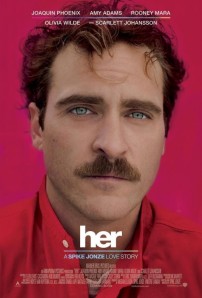 Yes, this is the movie where Joaquin Phoenix falls in love with a machine. No, this is not a movie you should rush to avoid. Screenwriting this smart, inventive and passionate is a rare species these days. So all praise to Spike Jonze, who wrote and directed his most original film since 1999’s “Being John Malkovich”. “Her” is a movie I’ll probably end up watching twice. Maybe more. It’s a film with the richness of great fiction. Like “The Master” (the movie I’m always mentioning these days), it’s not that you have to return to understand it. It’s that you have to return to realize how fine it really is. The surface may terrify you (who the heck falls in love with a talking machine?). The depths enfold you. The whole reveals itself, and then you may return to it just to appreciate its many beautiful moments. Yes, “Her” is a science fiction movie set in the near future. But it’s a movie that relies on ideas instead of computer tricks to stir up excitement. What you won’t know until you see it is that Jonze is a virtuoso, a master filmmaker who turns the future into his own thrillingly unique vision. I realize that this has not been a normal review. There is no need to name the characters, name the actors, assign adjectives to their acting. Look at who is in this cast. You know what I think of them. And you know what I think of this film by now. Jonze, a fantastic director, has given us a movie to dream on.