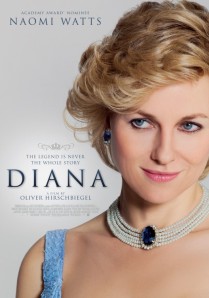 Naomi Watts is not the first name that springs to mind as the embodiment of Lady Diana, the late princess of Wales, unlike, for instance, the role of Betty Elms in David Lynch’s “Mulholland Drive”. I give the actress credit for her commitment to this assignment, but she’s still not quite right, especially if you’ve seen any newsreel footage of the real Lady Di. With that aside, I didn’t hate the movie, unlike many critics who panned it almost instantly. But you should know that “Diana” is not a biography of the late princess. Instead, it focuses on the final two years of her life and her secret affair with Hasnat Khan (Naveen Andrews aka Sayid from “Lost”),  a Pakistani heart surgeon. The movie works best early on, when the couple first met. But as soon as the story leaves this period behind and focuses on the final year of her life, “Diana” begins to resemble an old fashioned British TV movie. It’s not so bad to watch, but we know most of the story already and while Watts tries her best, the movie remains strictly superficial. So in case you’re looking for greater insight into Lady Diana’s personality or her evolution as a princess, I’m afraid you’ll have to look elsewhere.