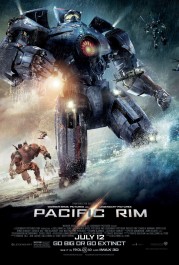 Granted, Guillermo del Toro’s “Pacific Rim” is not a work of art like his Oscar-winning Pan’s Labyrinth. But his latest Hollywood blockbuster sure is a surprise package of fun, fright and stunning visuals. For starters, it pays homage to such classic era monsters movies as “Godzilla” (1954). The director may be working off a borrowed dream, but he utilizes every technical advance of the last sixty years to produce one of the most enjoyable popcorn flicks of the summer season so far. You heard me. His “Pacific Rim” is primed to keep your heart racing so your brain would stop thinking. Allow it. In an eye-popping opening scene, we learn that an undersea earthquake left an opening wide enough for a race of aliens from another dimension to escape and rise to the surface. It doesn’t take long before these Godzilla-looking creatures launch a series of assaults on cities all across the planet. The solution? Jaegers, giant robots strong enough to kick monster ass. These robots are operated by humans, who call themselves at some point “the resistance”. Word of advice: just go with the illogic or you’ll miss the fun. Plus you can’t go wrong in the company of a visionary like Del Toro, who showed his artful side with “Pan’s Labyrinth”. Not here. With “Pacific Rim”, he means for us to leave with a silly smile on our face (hint: he succeeds). Yes ,The movie threatens more than once to go off the rails, but surprisingly, it never does. Instead, it moves like a bullet and maintains such a breakneck pace right through the closing credits. It’s”Transfomers” with a heart, a decent plot and a terrific sense of humor. In your face, Michael Bay.