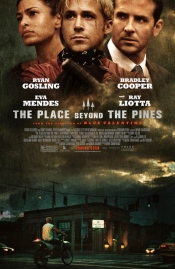 Director Derek Cianfrance pours everything he knows about directing in “The Place beyond the Pines”.  His movie messes with your head and then floors you. It’s that honest, that powerful. Describing the plot without giving too much away would be impossible. But you should know straight away that it’s a long, emotional ride. The movie is about many things, but mainly it’s about fatherhood and fate. Ryan Gosling , who teamed with Cianfrance on “Blue Valentine” is excellent as Luke, a daredevil motorcycle stunt rider. While stopping in a small town, he looks up a woman he slept with during his last visit (Eva Mendes) and finds out that the baby she’s raising is his. Usually you would except a guy like Luke to walk away. On the contrary, and without hesitation, he decides to stick around and take care of his son, despite the woman’s protest. Later on he has an encounter with cop Bradley Cooper, who has a wife and a kid of his own, and this is my cue to shut up. If you haven’t read spoilers, don’t let anyone tell you what happens next. But it’s hard not to blab about how skillfully Cianfrance brings the story to life. There’s a classic rigor to the film as the camera sweeps over this town, painting images that speak eloquently of family and sacrifice. Cianfrance takes his time to develop characters. And his work with the actors is exemplary, especially Gosling, who gives yet another terrific performance. Even the small roles are vividly acted. Ray Liotta for instance has only a few minutes onscreen, yet he registers indelibly. And Mendes is staggeringly good in a touching scene with Gosling and their son. That Cianfrance shapes something redemptive out of these blasted lives is proof that he is a filmmaker of rare and startling grace. His movie is rich and rewarding. It takes a piece out of you.