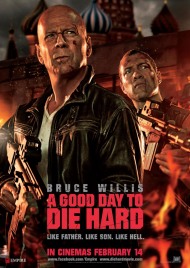 It’s easy to joke about Bruce Willis, now past 55, returning for a fifth chapter in the “Die Hard” series. It’s been over 20 years since the first one and 5 years since the last. Shouldn’t Willis be retired by now? OK, I said the jokes were easy. But you know what? Willis gets the last laugh. “A Good Day To Die Hard” may not be much of a movie; it’s a series of increasingly nutty stunts clumsily strung together. But good old Bruce is truly a real hero in a digital age. The role of badass New York police detective John McClane still fits him like a glove and he looks as fit as a guy half his age. What’s his secret? I still wonder. No secret about the movie though. It’s a routine rollercoaster action movie with “Die Hard” in its title. John McClane is in Moscow to check up on his son (Jai Courtney) who’s in jail. Turns out the estranged son is CIA and it’s up to McClane to save the day once again. Cheesy right? Perhaps it is. But there’s no denying that the stunts are terrific fun. And Willis and Courtney make a good enough team. And nevermind logic because who needs realism in a popcorn movie? “A Good Day to Die Hard” gets the action job done and you better believe that Bruce is still the man. That is all.