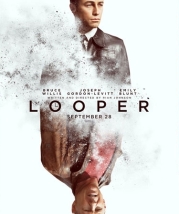 The mind-blowing science fiction event of the year arrives just in time to hold back the flow of Hollywood crap that’s been infesting the multiplex. “Looper”, written and directed by Rian Johnson, will be called many things, starting with Minority Report meets Terminator. But “Looper” glows with a blue-flame intensity all its own. This mesmerizing mind-bender (it’s really a mind fuck as well as a new classic among sci-fi flicks) is set in 2044 where people like Joseph Gordon Levitt get to whack thugs from the future for a living. Sounds simple? It isn’t. Because Levitt’s next target turns out to be him, 30 years older and looking a lot like Bruce Willis. Got it? Doesn’t matter. To reveal more would require me to enter spoiler territory. That’s my cue to shut up. Still, Gordon Levitt is so good, he owns the movie. And the underrated Willis does wonders with his role. The rest of the cast includes Emily Blunt, Jeff Daniels (in a knock out performance as an underground boss) and the brilliant Paul Dano. My advice: Let the movie work its magic over and you’ll know exactly why I had such a good time watching it. Your head will spin. Your palms will sweat. Your nerves will fry. What more do you want from a futuristic movie? Working from a solid script, Johnson creates exciting, hairy, high-octane tension. Does it always make sense? Not really. But it’s a small price to pay for a ride that starts at wild and accelerates from there. Go for it.