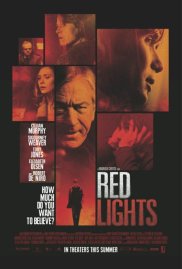 Judging from the trailer, “Red Lights” looked like it might be one of the best horror movies we’ve seen in quite a while. But isn’t it always the case with trailers? Surprise. The movie sucks.  Cillian Murphy and Sigourney Weaver (both good actors) play two university professors who specialize in explaining to people why ghosts don’t really exist. Then Robert DeNiro shows up, as a blind man who also happens to be psychic. Can he prove them wrong?  What DeNiro is doing in this stupid mumbo jumbo is a bigger mystery than anything in the script. Nothing here makes any sense, with a premise that wouldn’t hold up as a half-hour TV episode, much less an overlong, indulgent feature film that’s as lousy as its title. Skip it.